Given that I was out all day yesterday — primarily attending an uptown art salon in Lower Harlem, where I sang — I completely missed this odd bit of NYC local news: MANHATTAN GIVEN BACK TO INDIANS (well at least a part of it)

Although I have some close ties with the Ramapough Lunaape and am acquainted with Chief Dwaine Perry, I have not to my knowledge crossed paths with the New York Post article’s cited chief Anthony Jay Van Dunk nor have I met the cited son of artist Louise Bourgeois — I have been a fleeting fan of hers due to her longevity/continuing to create but expertise on her life & oeuvre lies with my twin sister, the art historian — Jean-Louis Goldwater Bourgeois. I don’t know quite what to make of this transaction, but if the ultimate result is a patahmaniikan (prayer house) then fine. I did not get to participate in the Ramapough winter ceremony this past Saturday out @ Split Rock, for it was cancelled due to snow/inclement weather; so I have not heard any direct commentary from the Source, as it were. 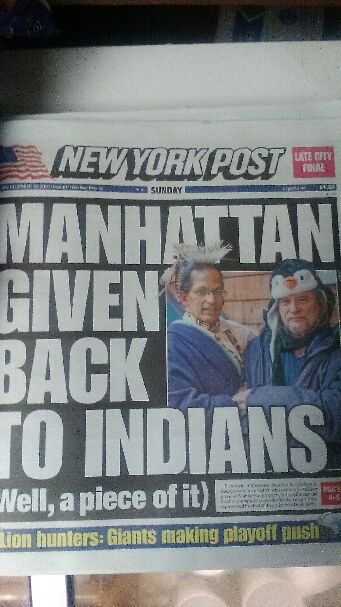 The article says Bourgeois fils has been a Standing Rock benefactor, yet I was more interested to learn of other Natives’ participation in the Occupy Movement for in all the months I was involved in it, particularly Occupy Music, I never met any. Now, if only this M. Bourgeois would get behind the fight to establish Indigenous Peoples Day in NYC. Overall, it was just a little odd piece of news to be sent to me by other Urban Native friends, at the end of the year when Standing Rock has become such a Hollywood trendy Cause (Elvis’ grand baby appearing at hyped LA benefits) & indigenous chic itself has been atomizing err’where — especially on the backs of musical artists with no Native roots including hip-hop ones & judges of The Voice like Alicia Keys — but I am still encountering folks who never heard of what’s going on with the Dakota Access Pipeline (or any other of this land’s black snakes). It’s weird to be revisiting the apocryphal sale of Manhattan by the Lenape to the Dutch, even as our Tri-State news is dominated by news of president-elect Trump’s vast real estate holdings here, the need to barricade Trump Tower in Midtown, and the ongoing discussion of the City as Trump’s fiefdom. I hope the Ramapough do not get targeted by limousine liberals, due to their local residence. Meantime, instead of hashtagging activism, focus & funds need to be directed to the many Native protectors of Standing Rock who are now facing felonies / about to have their cases trafficked through the courts in North Dakota — and there’s inadequate legal representation for most. Some of us staying woke despite the narcotic of holiday cheer.

Anyroad, I believe this story jumped out at me due to a long conversation about Native American roots out of the Mid-Atlantic and “outsider art” creation we had on Friday afternoon in Chelsea, on the verge of a gallery crawl through the ‘hood to see Titus Kaphar’s opening @ Jack Shainman & the great Bicentennial Series show of one of my favorite painters/fellow Georgian Benny Andrews @ Michael Rosenfeld Gallery. Some strange confluence out of the dialogue and Early Colonial (Kaphar) plus Bicentennial/Jim Crow reflection (Andrews) stirred things up…& made me recall the peculiar but beautiful work of Frohawk Two Feathers who was de vogue a few years back, with prominent Chelsea gallery representation & who I have never met but this particular project is extremely similar to my inner imaginorium/worldview – although he is younger than I, born (interestingly) in the year of the American Bicentennial, 1976: Heartbreaking and shit, but that’s the globe. The Battle of Manhattan 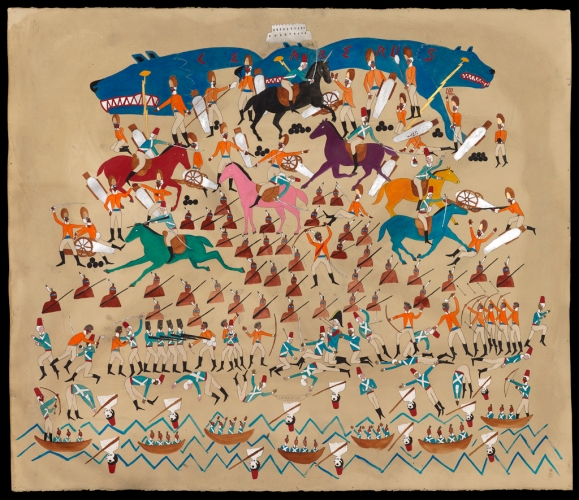 Chicago-born, LA-based Frohawk Two Feathers is the alias of Afro-Native artist Umar Rashid (who also does vanguard and alt-hip-hop music under the monikers Kent Cyclone & Tha Grimm Teachaz); and the 2014 culmination of a series of his work blending Afrofuturism and fact / fiction of early settler colonialism in the Americas caught my notice for decades prior to my arrival in New York City — in part due to my Native American great aunt Helena’s residence in Harlem since the 1930s — I had been an (alternative) history buff preoccupied with the lore of the Ramapough, Jacks-and-Whites / other isolates of the area; the apocryphal sale of Manahata and the Algonquin villages of the landmass; and the religious/occult traditions arising from the upstate Burned-Over District. [Which also drew my interest to the now-defunct Sundance network show The Red Road, which focused on Ramapough, starring half-Hawaiian actor Jason Momoa who claims Native American & for which my cousin’s wife Marcey Tree-In-The-Wind served as a consultant.] Two Feathers’ work seemed to at least gloss similar concerns:

These are a few of the characters in a wildly original telling of the fictional Battle of Yonkers in 18th-century New York; their portraits and those of other tattooed warriors, misled rulers and vengeful women…

…[final] installment of “The American Proteus: An Invocation and the Wars Between the Rivers,” an alternative account of the colonization of northeastern North America that is both written and visual in form, epic in scope, and built around the imaginary Republic of Frengland (a combination of England, France and Ireland).”

There were paintings that were meta portraits or sometimes reminiscent of historical battles depicted on deerskins or echoing ledger art, mixed with art forms of ancient KMT & tipis on display as well. They were somewhat unnerving, for it was like an unknown Spirit had excavated my interior landscape & reproduced it for all eyes to see. And I will leave it at that for now, for there’s far more concerning this work that I wish to explore…A’ho* 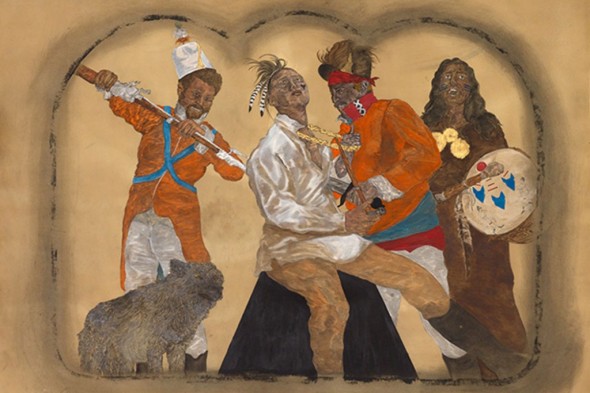